Journalists have been harassed and assaulted by police at Minnesota protests over Daunte Wright’s killing, an attorney said in a letter to the governor.

Minnesota police aggressively arrested a CNN producer and assaulted multiple other members of the press covering protests over the police shooting of Daunte Wright last week, according to an attorney representing dozens of news outlets.

More than 100 people have been arrested at protests in Brooklyn Center since Wright was shot and killed on April 11 by a police officer during a traffic stop. Some journalists have also reported being harassed, intimidated and detained by police while covering the unrest.

In one case, CNN producer Carolyn Sung was grabbed by her backpack and thrown to the ground by state troopers while she was trying to comply with a dispersal order on Tuesday. She did not resist, showed her credentials and repeatedly identified herself as press, but was nonetheless arrested, the letter said.

Despite hearing Sung, who is Asian American, identifying herself and saying that the zip ties on her wrists were too tight, one trooper yelled at her, “Do you speak English?”

The male security agent hired by CNN to work with her was also briefly detained but was released when he showed his credentials. Sung was taken to Hennepin County Jail in a prisoner transport bus.

“She was patted down and searched by a female officer who put her hands down Sung’s pants and in her bra, fingerprinted, electronically body-scanned, and ordered to strip and put on an orange uniform before attorneys working on her behalf were able to locate her and secure her release, a process that took more than two hours,” the letter said.

The mistreatment of the press at the protests has been condemned online by numerous media organizations. CNN anchors Brian Stelter and Jake Tapper called out Sung’s incident in particular.

On the same night, a New York Times journalist was repeatedly hit by police who surrounded a car he was in with several other people, according to the letter. Police also tried to break his camera.

Freelance photographer Tim Evans said an officer punched him in the face and tore off his press badge, and another officer subsequently smashed his head into the ground. He was cuffed before a third officer freed him.

The letter was sent to Walz after he held a phone conference with the attorney and law enforcement officials on Saturday.

“Journalists must be allowed to safely cover protests and civil unrest. I’ve directed our law enforcement partners to make changes that will help ensure journalists do not face barriers to doing their jobs,” Walz tweeted after the call.

A U.S. District Court judge issued a temporary restraining order on Friday that prohibited police from arresting, threatening to arrest or using physical force against journalists.

Following that order and the governor’s intervention, the Minnesota State Patrol acknowledged in a press release Saturday that journalists covering the protests are exempt from dispersal orders and that the use of chemical spray against them was banned. 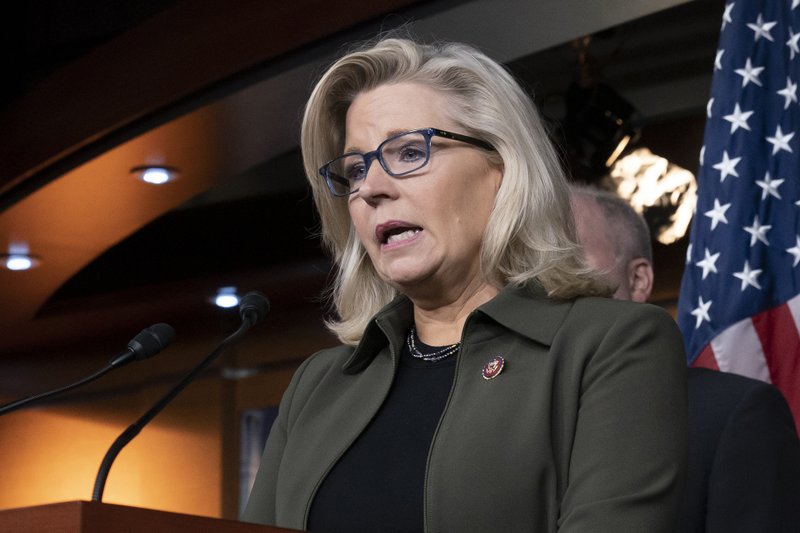 The majority of House Republicans who voted to impeach former President Trump in January saw fundraising gains in the first three months of the year despite intense backlash from members of their own party, according to new financial disclosures.

Most of the Republicans who publicly went against Trump after the Jan. 6 attack on the Capitol saw their 2021 first quarter hauls increase from their 2019 hauls during the same period. Two of Trump's most high-profile critics in the House received a major financial boost in particular: House GOP Conference Chairwoman Liz Cheney (Wyo.) raised $1.5 million at the start of 2021 compared to $321,000 during the same period in 2019, while Rep. Adam Kinzinger (R-Ill.) brought in $1.2 million during the first three months of the year compared to $326,000 in 2019.

The fundraising hauls come amid a growing divide within the party, as Trump and his allies threaten to support primary challengers against those who voted to impeach him - some of whom are also raking in money.

"It still means they'll have serious races where they'll have to work hard to beat back a challenge, but the funding will be there for them," said GOP strategist Doug Heye of the Trump critics raking in cash.

Ten House Republicans voted to impeach the former president for his role in inciting the Capitol riot on Jan. 6, which came after Trump repeatedly sought to cast doubt on the results of President Biden's victory in the general election. Thought the trial ultimately didn't end in conviction, seven Republican senators crossed the aisle to join their Democratic colleagues, making it the most bipartisan impeachment vote in American history.

Trump has vowed to take down Republicans who supported his impeachment, and recently blasted Cheney as well as Sen. Lisa Murkowski (R-Alaska), who voted to convict. Both of them are up for reelection in 2022.

"Senator Lisa Murkowski said she is 'still weighing whether she will run again' for the Senate in Alaska. In other words, there is a chance that she won't run! Wouldn't that be great?" Trump said in his statement.

He also took aim at Cheney, mocking her for being "so far down in Wyoming polls that the only way she can win is numerous candidates running against her and splitting the vote."

Yet Cheney has easily outraised her primary challengers, as has Kinzinger.

Other Republicans who supported Trump's impeachment have also seen a massive cash windfall.

Some of the Trump-aligned Republicans challenging incumbents this cycle also raised impressive sums during the first quarter. In Ohio, for instance, Gonzalez's Trump-endorsed primary challenger, Max Miller, raked in more than $500,000 during the period, including a $50,000 loan he gave his campaign.

Rep. Marjorie Taylor Greene (Ga.), one of the most controversial pro-Trump Republicans on Capitol Hill, announced she brought in a record $3.2 million during the first three months of the year, while Rep. Steve Scalise (R-La.) raised $3.2 million.

In the upper chamber, Sen. Josh Hawley (R-Mo.), who played a key role in working to block the certification of the Electoral College results, raised $3 million in the same time period, while Sen. Ted Cruz (R-Texas) raised $5.3 million, despite neither being up for reelection until 2024.

Regardless of Trump's impact on the party, experts say the record hauls from both sides of the GOP are the result of digital fundraising and increased coverage of members in the spotlight.

"If you are a prominent politician with a high name ID that gets talked a lot about in the media, regardless of how you're being talked about, you are going to be able to appeal to a broader set of donors and raise more money," Heye said.

The state’s protective “red flag” law didn’t keep firearms out of the shooter’s hands at a critical time, according to the police chief.

The teenager police say fatally shot eight people at a FedEx warehouse in Indianapolis this week legally purchased the two semiautomatic rifles he used even though the FBI questioned him last year after a disturbing warning from his mother, police said Saturday.

Agents interviewed Brandon Hole a year ago after his mother told law enforcement that she feared her son might attempt “suicide by cop.” Hole, 19, took his own life after the FedEx shooting on Thursday.

Paul Keenan, the special agent in charge of the FBI’s Indianapolis field office, said agents found no evidence of a crime then.

But the Indianapolis Metro Police Department at the time placed the teen on a “mental health temporary hold” at a local hospital to assess his state of mind. They also confiscated a shotgun Hole had purchased within the previous 24 hours. The police report noted that the shotgun was seized from a “dangerous person,” The Indianapolis Star Tribune reported.

The shotgun was never returned to Hole, Metropolitan Police Chief Randal Taylor told The New York Times. Yet the teen was nevertheless able to legally purchase the two powerful assault rifles last July and September, according to police.

The state’s “red flag” law was not used to keep firearms out of Hole’s possession. Such laws, which exist in at least a dozen states, bar people deemed a danger to themselves or others from owning guns.

It wasn’t immediately clear if officials ever initiated a court action under the law to bar Hole from gun possession, according to Taylor, or if a judge may have ruled against such an action. In any case, red flag laws usually only temporarily restrict gun ownership.

Investigators are still seeking a motive for the devastating killings. Hole was a former FedEx employee.

Hole’s family on Saturday apologized for the tragedy.

“We are devastated at the loss of life caused as a result of Brandon’s actions; through the love of his family, we tried to get him the help he needed,” said a statement from the family.

“Our sincerest and most heartfelt apologies go out to the victims of this senseless tragedy. We are so sorry for the pain and hurt being felt by their families and the entire Indianapolis community.”

The complaint alleges that Falwell withheld key details about a personal scandal from the school that later became public.

The complaint, filed Thursday in Lynchburg Circuit Court, alleges Falwell crafted a “well-resourced exit strategy” from his role as president and chancellor in the form of a 2019 employment agreement while withholding from the school key details about a personal scandal that exploded into public view last year.

“Despite his clear duties as an executive and officer at Liberty, Falwell Jr. chose personal protection,” the lawsuit says.

It also alleges that Falwell failed to disclose and address “the issue of his personal impairment by alcohol” and has refused to fully return Liberty’s confidential information and other personal property.

Falwell responded to a phone call from The Associated Press on Friday with a text saying he was not available to talk.

It wasn’t immediately clear if he has an attorney representing him in the matter. The AP left a message seeking comment with an attorney who has represented him previously.

Falwell’s departure from the Virginia university in August 2020 came soon after Giancarlo Granda, a younger business partner of the Falwell family, said he had a yearslong sexual relationship with Falwell’s wife, Becki Falwell, and that Jerry Falwell participated in some of the liaisons as a voyeur.

Although the Falwells acknowledged that Granda and Becki Falwell had an affair, Jerry Falwell denied any participation. The couple alleged that Granda sought to extort them by threatening to reveal the relationship.

The lawsuit says that Falwell had a “fiduciary duty to disclose Granda’s extortive actions, and to disclose the potential for serious harm to Liberty.”

Instead, Falwell “furthered the conspiracy of silence and negotiated a 2019 Employment Agreement that contained a higher salary from Liberty,” the suit said.

A Liberty spokesman didn’t immediately respond to an inquiry about whether the school had additional comment.

Before the Granda scandal exploded, Falwell had already been on leave after he posted a photo on social media that sparked an uproar. It showed Falwell on a yacht with a drink in his hand and his arm around a young woman who was not his wife, their pants unzipped and his underwear exposed.

The lawsuit, which alleges three counts - breach of contract, breach of fiduciary duty and statutory conspiracy - is seeking more than $10 million in damages.

Falwell, an attorney and real estate developer, had led the evangelical school since the 2007 death of his father, the Rev. Jerry Falwell, who also founded the Moral Majority, the political organization that made evangelical Christians a key force in the Republican party.

In early 2016, Falwell become one of the first conservative Christians to endorse Donald Trump for the presidency, and defended him after Trump’s lewd remarks about women and sexual assault, captured in a 2005 “Access Hollywood” recording, became public late in the campaign.

Falwell went on to court controversy and stay in the news, vigorously criticizing Democrats online.